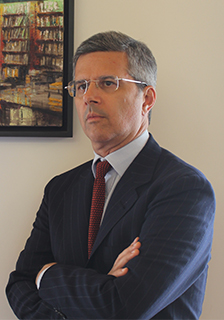 Graduated (cum laude) in Law, from La Sapienza in Rome, in 1989; has been a member of the Rome Bar Association since 1992, admitted to practice before the higher courts since 2004.
He gained his professional experience working with leading Italian and foreign professional firms.
He is specialised mainly in the field of private law entities, foundations, and company law, with a focus on drafting opinions, company statutes, and shareholders' agreements.
He also works in litigation, before the civil justice and administrative justice bodies, particularly in the field of economic law.
He is also a regular member of arbitration panels in free and administered proceedings.
He is full professor of Civil Law and Economic Analysis of Law at the University of Roma Tre.
He studied at the University of Cambridge and the University of Heidelberg; he was a visiting scholar at Yale University and New York University Law Schools.
He wrote the monographs La pena contrattuale (Giuffrè, Milano, 1991), Le fondazioni (Jovene, Napoli, 1995) and Le successioni nel diritto comparato (Utet, Turin 2002).
He is a member of the editorial board of Rivista di diritto civile, a prestigious Italian private law journal.
He was a member of the Ministerial Commission for the Reform of the Law of Legal Persons, the Commission for the Reform of Company Law and the Reform of Bankruptcy Law.
His regular participation as a speaker at academic and professional conferences of national importance, particularly on the topics of economic and energy law (he was among the organisers of the National Conference on Energy Law and the Conference for the 20th anniversary of the Antitrust Authority).